Why a sudden post on VU meters… aren’t they old tech??… Well we at insigniaHiFi love old tech and its has now become a cliche that in Audio tech, Old is really Gold!

So, before coming to the main subject (beware its is insanely cool… 🙂 ), let us first quickly understand what is a VU meter.

A VU meter is called a volume unit (VU) meter or standard volume indicator (SVI). It is a device displaying a representation of the signal level in audio equipment. The Acoustical Society of America standardized it in 1942 (ANSI C16.5-1942) for use in telephone installation and radio broadcast stations. Consumer audio equipment often features VU meters, both for utilitarian purposes (e.g. in recording equipment) and for aesthetics (in playback devices).

Typically it is like a meter with a needle pointer which deflects as per the maximum amplitude of the sound wave, in general that would be the bass beats and the low end covers the most of the acoustical energy.

The VU-meter (intentionally) “slows” measurement, averaging out peaks and troughs of short duration, and reflects more the perceived loudness of the material than the more modern and initially more expensive PPM meters. For this reason many audio practitioners prefer it to its alternatives, though the meter indication does not reflect some of the key features of the signal, most notably its peak level, which in many cases, must not pass a defined limit.

Ok.. so we got the idea of what these classic beauties are and perhaps many of us would have seen and experienced them as well…

The intent behind this article however is to share the way, we at insigniaHiFi incorporated the VU meter in our Valve amplifiers. In good days of Tube radios, they used to have a so called indicator valves installed which used to glow (Fluorescence) when the circuit hits resonance on channel match. Since these tubes offered some characteristics (listed below) which were very suitable for their use as VU meter, we explored and experimented and adopted them for the same. Before going directly to them, lets have a look at how they look, work and how many types are there and of course just a look at them will make you realize why so much fuss about it and why an article…

Some Images from the Web

Our Choice of Magic Eye for the Stereo Integrated Amplifier

We decided to go for a VU meter based on Magic eye which could be mounted sided by side with the other valves & appear integrated with the rest of the system. In order to have such arrangement it was imperative that the tube should have the meter (indication) on the front face so that it would be visible from the front rather than top and also given this arrangement, it would facilitate easy replacements. 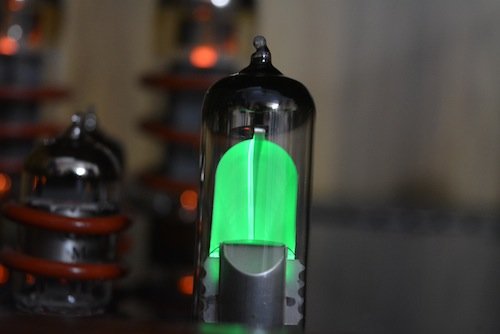 We chose to go for Russian 6E1 tubes for this which has following suitable characteristics.

Ok! Enough! How does it look?