One of the most overlooked, less talked about & under-rated characteristics of speakers (Audio systems in general) is the aspect of PHASE or technically put – THE PHASE COHERENCE! 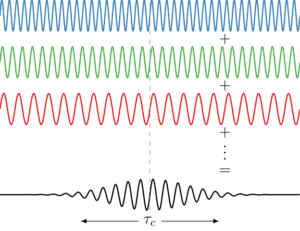 This articles aims at bringing out the importance of this concept which has unbelievably huge impact on sound experience.

For the better understanding of all, it becomes imperative to understand what exactly is PHASE & what does coherence mean!

As we all know sound waves are sinusoidal in nature made up of different frequencies mixed together. Usually Low frequencies are referred as BASS (< 1000 Hz), the mid frequencies ( from 1000Hz to 5000Hz) as mid-range & high frequencies (>5000Hz) as Treble, though there is no distinct boundary of these bands, of course!

To understand phase the best way is to visualize it graphically as below.

UNDERSTANDING PHASE in the context of MUSIC

Evidently from the illustration above we understood that the sound pressure rises & falls periodically at a speed known as Frequency (Cycles per second). Now applying this basic understanding to the sound coming from a typical 2-way speaker, we can conclude that the sound coming from the WOOFER will have LOWER FREQUENCIES & LARGER WAVELENGTHS than the sound coming from the TWEETER. Now we need to take this concept further towards the context of music. Usually all instruments have complex sounds, in the sense that they emit sounds of multiple frequencies mixed together, generally known as harmonics, higher harmonics are of course higher frequencies. When we listen to a live performance all these frequencies/sounds at an instant are emitted simultaneously and reach together at one of our ear [NOTE: Both ears are located at different distances from the source of music], it doesn’t happen that the higher frequency component reaches the ear faster, higher frequency just oscillates faster but all the sounds travel at same speed and that is speed of sound and in this example, they travel same distance so they take same time to reach one of our ears. Let us visualize this graphically.

In the above example the 2 sound waves coming from the Guitar when a note is played reaches simultaneously to the ear. We can see that the blue wave reaches the ear at its peak but the yellow one reaches when the pressure level is close to zero. This is an example of PHASE DIFFERENCE BETWEEN THESE TWO WAVES. Simply put phase is  the fraction of a period between peaks. It is this phase difference which is referred to as the TIMBRE & its is very characteristic of an instrument, its what makes the guitar sound like a guitar and for that matter an acoustic uitar like an acoustic guitar different from other guitars.

Coming back to the subject of this article, how is the phase important from speaker design point of view?

Consider the same sound as in the example above, but now its recorded & being played in your room through a speaker. For understanding the concept let us assume that the speaker is a 2-way design with one woofer & one Tweeter. The tweeter will sound the higher frequencies & woofer will play the lower. So, in our example we can assume that the blue wave will be coming through the tweeter & the yellow from the woofer.

Look at the representation of this below: 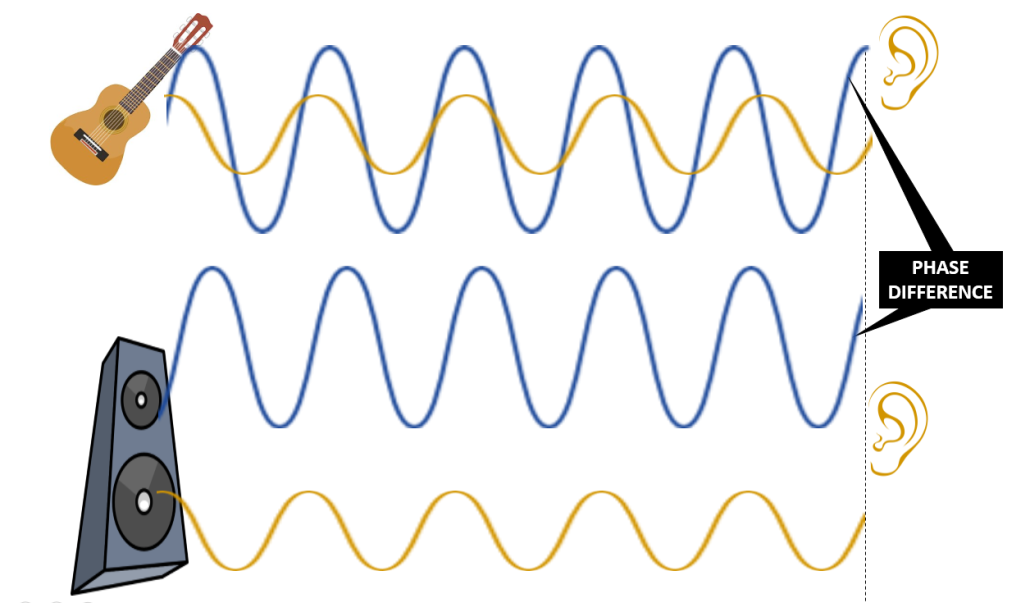 We see that when the same sound is being played trough the speakers there is a mismatch of phase between the Tweeter & the Woofer. Although the same note will be heard with same pitch/frequency but there will be INCOHERENCE between the frequencies present bin the sound. This leads to not less than a collateral damage to the way we perceive music or to the way we are supposed to. This alters the TIMBRE & Localization (explained later) of the sound.

What causes this problem? How does it impact the listening experience? What are the ways to handle this problem? I’ll come to all these issues subsequently in the article but before that, its imperative to understand how humans/human ear deal with phase & its importance for us in day to day life. We will now try to understand how human hearing localization takes place.

Ever wondered how without looking at a mosquito you get to know immediately about its location, whether it is above, left or right … How do we sense this? Also, imagine there are 2 mosquitoes buzzing around you, you’ll be able to discern their respective positions although they’ll buzzing very very similarly. Most likely you’ll not be able to sense the difference in the frequency of the sound but for sure you know that there are 2 mosquitoes flying around you at different places. This ability is known as SOUND LOCALIZATION and a deeper understanding into this will clear a lot of doubts and also will empower us in determining & designing a better sound system. 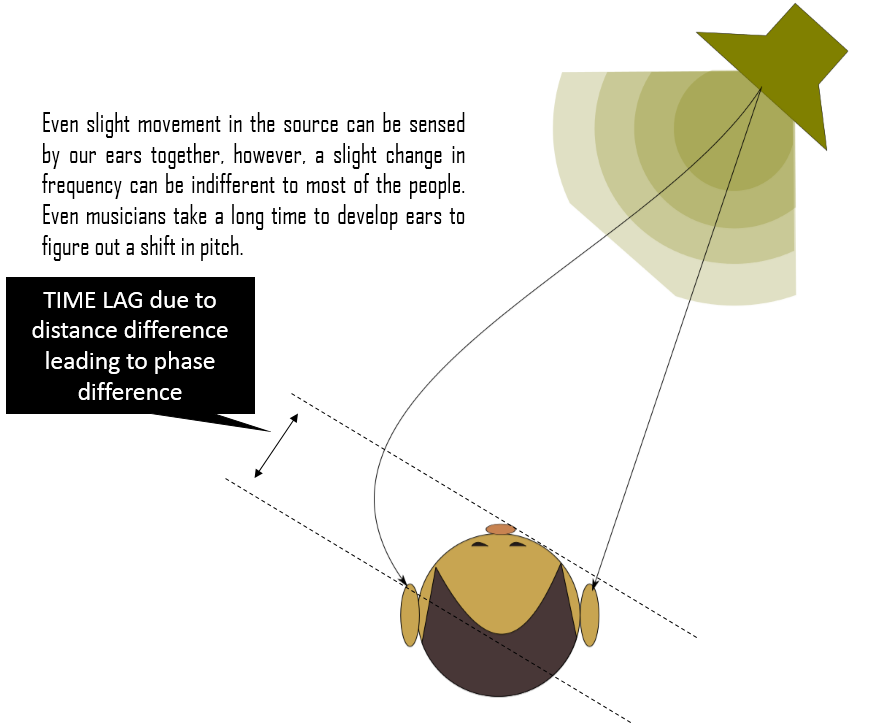 The spatial positioning of our ears with inherent capabilities to discern phase difference makes us very sensitive towards phase. Now we know how we could sense the direction & position of mosquitoes.

Human ears are in general forgiving for frequency shifts but they are HIGHLY SENSITIVE TOWARDS PHASE SHIFT. It is phase which gives us the sense of localization.

COMING BACK TO THE MAIN SUBJECT…

We now know that music, or in general any sound is usually very complex as they are a mixture of different frequencies even from the same source. We also know that the time lag between the sound reaching our ears gives us a sense of localization, this happens precisely because of phase difference or phase shift. We know that, FREQUENCY, SPEED of SOUND & PHASE are three DIFFERENT & INDEPENDENT terms. We have to use this understanding now to apply on speakers.

Most speakers delay different tones by different amounts, which is a major reason they sound like ‘speakers’ instead of the real thing. When the speaker puts no delays (or phase shift) onto any tone, it is a perfectly ‘time coherent’ design. This ideal system is what we aim to design for near perfect listening experience.

Looking at the constituents of a typical 2-way speaker unit, we know that there are 4 basic parts:

We have a fairly good understanding about the problems of phase at this point of time, simply put, any problem in phase leads to sever localization problem and we know how sensitive our ears are. Let us now understand who is the culprit messing with the phase, but before that let us first clearly identify & note the actual problems with speakers… as once Albert Einstein had said “If you clearly define the problem – half of it already gets solved“!

The speaker drivers suffer from these problems because of several inherent properties, the major ones being:

What is the solution?

Suddenly we realise that a whole new dimension of evaluating a speaker & the way we normally perceive music has opened up posting a daunting task to handle all these problems.

These problems & characteristics of speakers are very rarely talked about and reported by manufactures despite the fact that this is one of the MOST IMPORTANT CHARACTERISTICS WHICH CANNOT BE COMPROMISED! Have we ever thought WHY?

Usually parameters like phase, sound-stage, inter-driver phase-shift, channel in-coherence etc. are very difficult to measure & report, not to mention very hard to be taken care of. Also there is a degree of perceptiveness involved so its importance varies psychoacoustically from one listener to another! The time & resources involved in considering all these factors while designing a phase coherent speaker system vs a normal speaker system with a good frequency response is much larger. However Phase-Coherent Speakers, especially Advanced Transmission Line Speakers are the last resort for an audiophile looking for best experience.

Design a phase-coherent speaker system is basically an optimization task with multiple constraints emanating from the characteristics of drivers, the geometry of Cabinet, the damping material, availability of crossover components, Flat-Frequency Response, etc, to name a few. All these constraints make it an extremely complex task that is pretty hard to solve manually. Usually with the help of simulation softwares, all these parameters are modelled by taking measurements of the parts (Drivers, Crossovers, Cabinet Geometry, Stuffing Material, etc.). The closest standards are chosen from the simulation results and tested back and further iteratively tuned for close to perfect design.

In subsequent articles, I will try to cover more technical aspects of designing a phase-coherent speaker system.

Courtesy: I have learned a lot from Mr. Hari Iyer about these aspects of music & the practical aspects of designing a perfect speaker system & am extremely grateful to him.

How to Bias your AMP