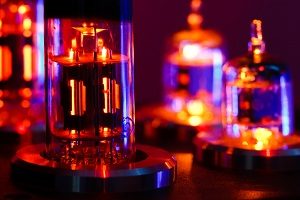 Before getting to the nuts and bolts of biasing your stereo amp, for the sake of continuity its important to understand “Biasing” itself first.
We all know that valves have multiple electrodes like Anode, Cathode and Grids, in order to operate in a particular manner, for example, linear operation is desired for a stereo amplifier and distorted/overdriven or saturated for guitar amplifiers, you need to apply a “Bias”.

In a similar manner bias, which is normally a DC VOLTAGE, is applied and the value of the voltage is decided by other parameters like Anode/plate voltage etc. This also determines how much power the valve will dissipate. A bias controls the flow of electrons (current) and this in conjunction with the plate voltage determines the power. (Power = Plate Voltage x Plate Current)

In a typical push pull amplifier bias voltage is normally negative, the more negative it is the more it will restrict the flow of electrons and less will be the current so less will be the power, leading to a relatively muddy tone, flabby Bass etc. but the life of the valve will increase. If the bias voltage is made leas negative the current will increase and after certain value the valve’s max power rating will be crossed, if you make the boas more positive the valve might start glowing cherry red and a permanent damage will occur. This is normally the little exaggeration of hot bias, in other words very hot bias would be apt. Normally guitar amps are configured little on the edge of the maximum power rating so that they can get into saturation called as overdrive.

In a push pull amp one valve conducts for the top half of the signal and the other conducts for the bottom half, these two are merged together by the output transformer. For the proper replication of the signal (sinusoidal) the top and bottom half should be identical and so should be the bias. In a stereo amplifier both the channel and hence total 4 halves or 4 valves should be at the same level or as close as possible practically. Biasing thus is a very delicate job of tuning the amplifier properly in a balanced manner. It hence demands patience and concentration.

CAUTION: Valve amps are extremely sensitive to bias, a slight turn in the bias pot (normally installed inside the amp) can swing the bias point and a multifold change in the current happens at the plate. This might lead to a very hot boas condition and valves can even melt and damage to amp can happen. You must be very concentrated, calm, patient and safety conscious while doing these adjustments.

I have built myself a push pull guitar amp based on 2 EL34 valves and i biased it NEAR LIMITING POWER RATING of 25 watts.

My another amplifier is a 60 watt push pull stereo amp based on 4 EL34 valves, while biasing it for the first time I missed to look at one channel and got busy in adjusting another but the pot setting on one channel made the bias actually at a positive voltage rather than about -50V required, and after about 15 seconds i heard crackling sound and when I looked at the valves they had become white hot and i thought its going to melt, I immediately cut the power and fortunately the valves were saved but I still feel the sound is not as good as they should produce.

The bottom-line is bias setting is crucial for the health of the amplifier and your aural satisfaction. It must be handled with care and SAFETY.

How to Bias your AMP
Scroll to top