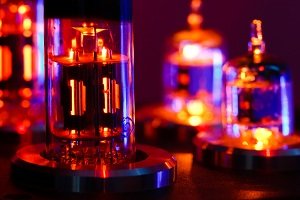 After decades of solid state (Transistors/OpAmp ICs) amplifier innovations, tube amplifiers are witnessing a sudden surge in demand. I’ll try to talk about this and some of the merits of Tube/valve amps in general.

Throughout this discussion I’m going to discard general sound systems flooded in the market with configurations like, 2.1, 4.1, 5.1 and so on…

If I try to answer why Tube Amplifiers have come back strongly after decades, in my opinion it is simply because of their Superior SONIC MERITS. I’ll touch upon this later in this article, meanwhile let me now talk about how in general an audio enthusiasts selects or evaluates an amplifier system, what are those parameters and characteristics which influences the decision.

The general technical properties like, the frequency response, THD (Total Harmonic Distortion), Power Output, Transistor vs Mosfet vs OpAmp circuit etc. are used as pointers to compare, evaluate and select an audio amplifier. Generally we look for an amplifier with a flatter Frequency Response over audible range (20Hz to 20kHz), lower THD%, Higher Power and we try to optimize our choice over these constraints. There are however a lot of other aspects of sound typically hard to quantify and examine and those aspects make a world of difference in sound experience, even 2 amplifiers with similar technical parameters may sound absolutely different. What are those aspects/parameters?… What is it which brings a real life live experience, what is it which make the sound so rich and full, these are some of the general terms OFTEN ASSOCIATED WITH TUBE AMPS and NOT discussed and talked about in OTHER amps.

At this point of time, now, I would like to talk about there terms: 1. The Soundstage, 2. The Harmonic Distortion & 3. The Headroom.

This how wikipedia define it, “The term soundstage refers to the depth and richness of an audio recording and usually relates to the playback process. According to audiophiles, the quality of the playback is very much dependent upon how one is able to pick out different instruments, voices, vocal parts, and such exactly where they are located on an imaginary 2-dimensional or 3-dimensional field. The quality of this soundstage can enhance not only the listener’s involvement in the recording, but also their overall perception of the stage.

Tube amplifiers have very minimalist design and have very very very few components overall also and in the signal chain also thus preserving the integrity and fidelity of the signal. Perhaps this is the reason they are in general termed as Hi-Fidelity or Hi-Fi.

For the sake of completeness and continuity I would like to let the reader know that harmonic simply means the multiple of the frequency of the source signal. These multiples are represented as %ge to the actual signal  andknown as Harmonic Distortion.

When solid state devices overload, the dominant distortion product is the third harmonic. The third harmonic “produces a sound many musicians refer to as blanketed”. Instead of making the tone fuller, a strong third actually makes the tone thin and hard. On the other hand, with tubes (particularly triodes) the dominant distortion product is the second harmonic: “Musically the second is an octave above the fundamental and is almost inaudible, yet it adds body to the sound, making it fuller”. Tubes sound better because their distortion products are more musical. Tubes provide a more appropriate load to transducers. Those are the fundamental reasons why tubes simply sound better.

How wide voltage swings the amplifier can allow before entering into overload region or clipping, this determines how much headroom it has. Higher operating voltages in tube amps & higher audible energy storage with lower value capacitors leads to a huge headroom. Typically a tube amp operates around 450V whereas a transistor operates about ~ 80 volts. This is most likely why many listeners feel that tubes sound more powerful.

We also should understand to make a choice between being technically right & talking judgments based on quantifiable parameters OR understanding the nuances of Music and the inherent art inside which actually makes it MUSIC. The above discussed aspects of an amplifier, The Soundstage, Harmonic Distortion, Headroom etc are some of the qualitative aspects which determines a true sonic experience and differentiates Tube amps from the OTHERS. Tube amplifiers measure poorly in the lab specifically because of these added distortions, but these distortions are often a part of what make them sound better.

This is my first post on this site and hopefully I’ll keep the journey going. Feel free to contact me for any queries or even for auditioning a tube amplifier.